At NuvoH2O, we are committed to improving the quality of life of all people. We focus primarily on improving water quality at home, in our communities, and around the world. 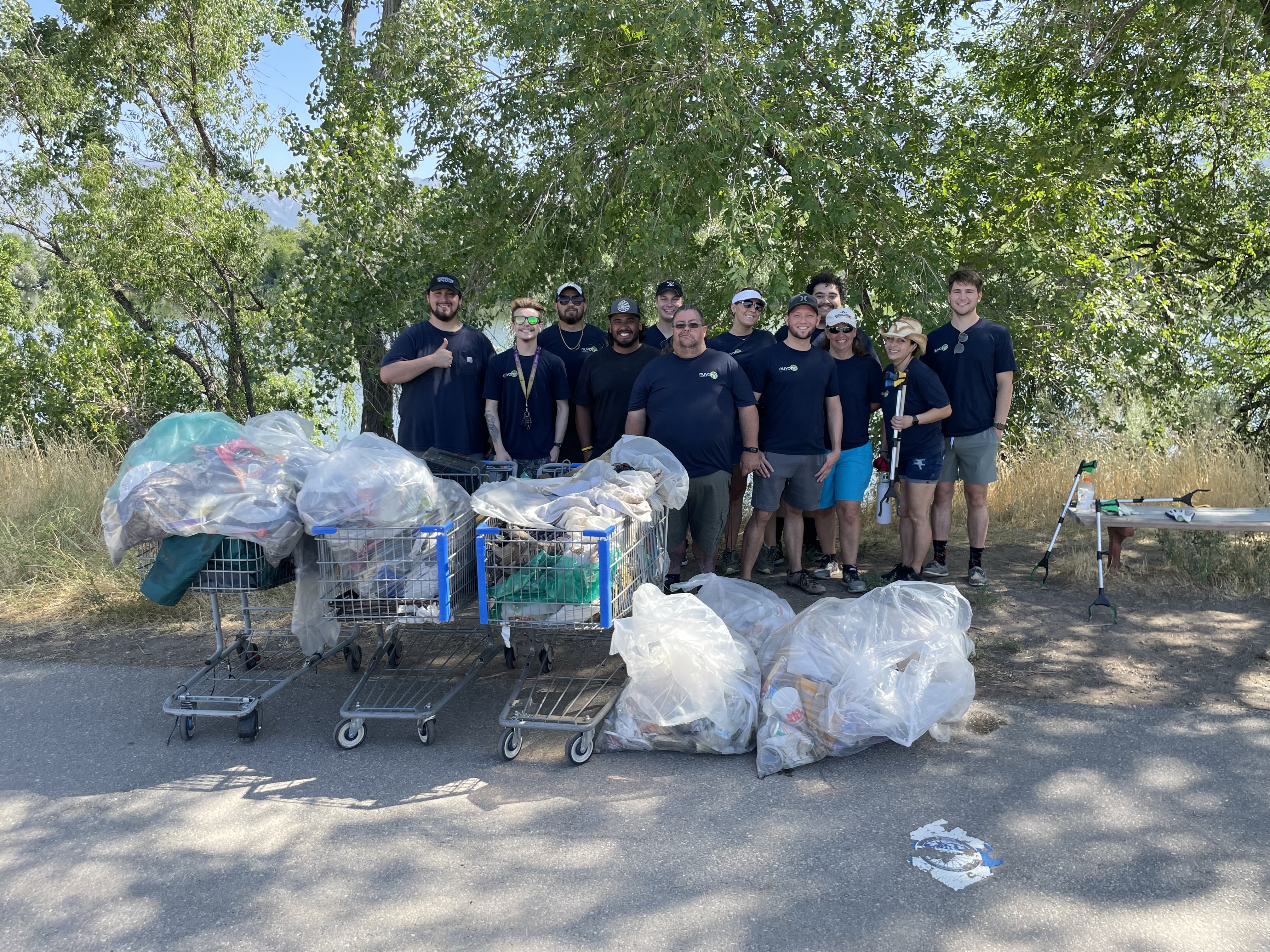 And into the woods we went, but not really, okay, kind of really. This month we braved the heat to help clean up the pond on 21st street in Ogden. Although we couldn’t get everything, we sure tried! After 14 volunteers provided 28 hours of service, three shopping carts and a dozen XL garbage were cleaned up and our mission was accomplished!

This past weekend we had the bitter-sweet opportunity to assist the Davis County Animal Care team in a pet adoption event held at our local PetSmart. Not so bright (it was a cloudy day) and early we all met at the animal shelter to pick up our pups. We each then transported our four-legged friends down to the local PetSmart to put them on display and by “display” we mean proudly walk them around, show them off, train them, play with and perhaps even spoil these little guys, and gals. Together our team was able to help four sweet pets find their furever homes and a new foster family for another.

We’d like to remind everyone to check their local animal shelter first when looking for a new pet. A big thank you to PetSmart and the Davis County Animal Care team for letting us help out! 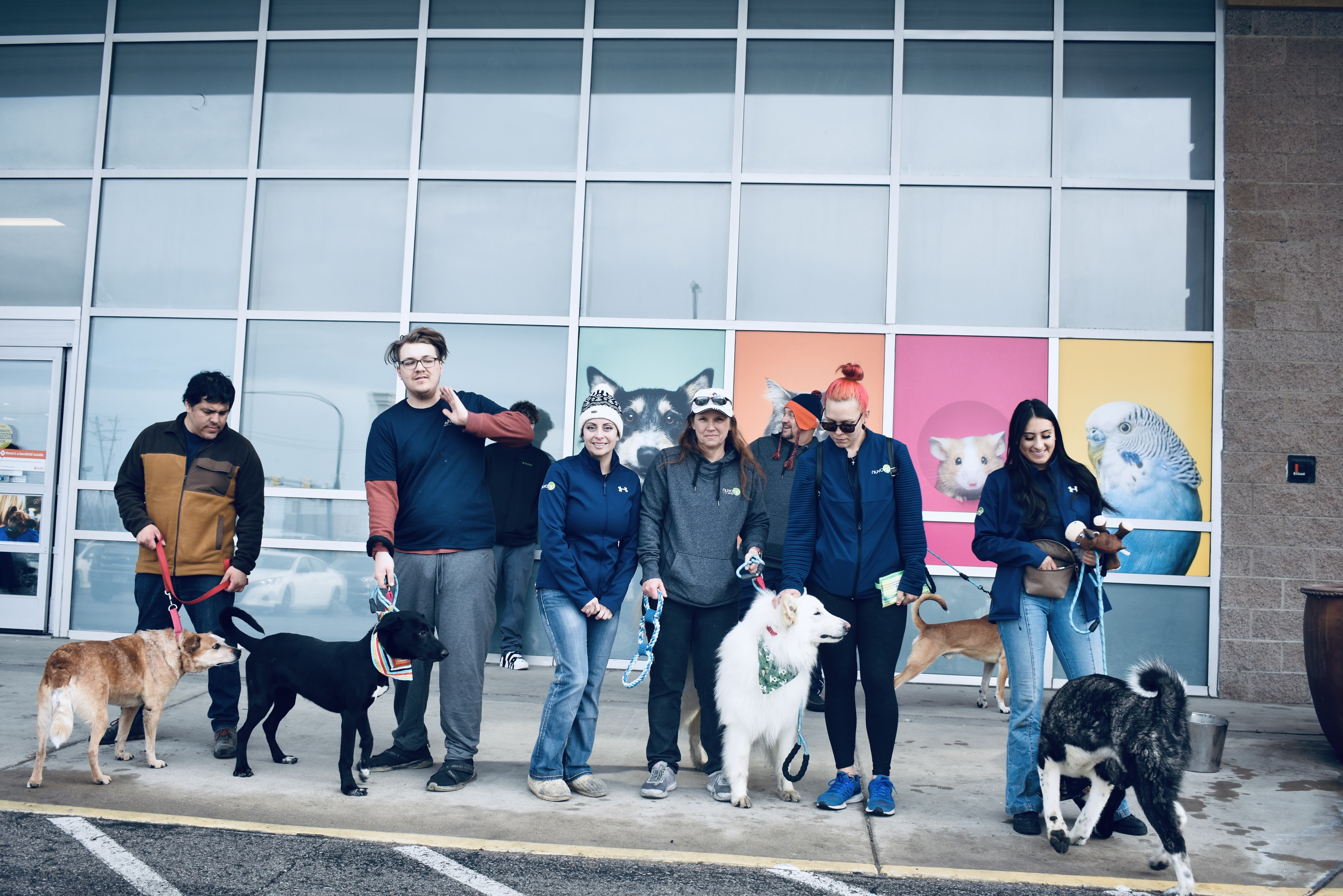 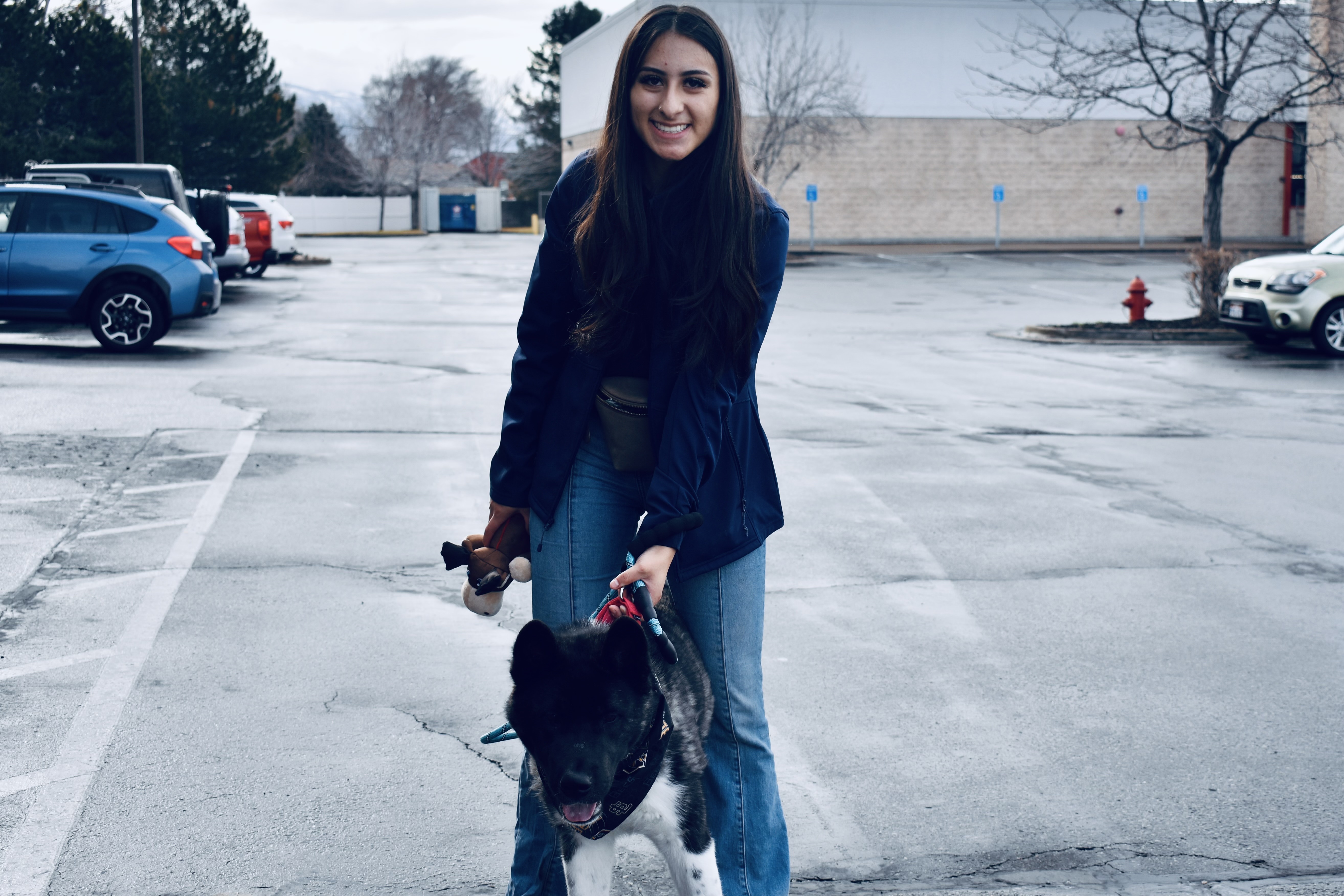 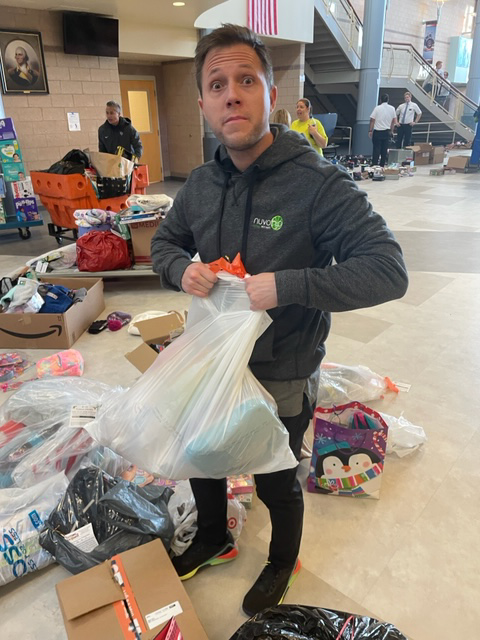 Santa’s little helpers were at it again. This year, thanks to lighter Covid restrictions, Community Christmas was able to put on their full holly jolly festival which includes a carnival for the kiddos to be entertained/distracted at while the adult’s “shop” for their little angels and a visit with the big guy himself, yup good ole’ Santa Claus.

When we arrived, it was all hands-on deck to prep for the arrival of the goodies. Then the flood gates opened, people from all over swarmed to moving truck after moving truck, fully packed personal trailers, and carload after carload to unload the massive amounts of gifts donated from loving folks. To see adults, children, and spunky teenagers pitch in to provide a fabulous event for those less fortunate than us is truly a heartwarming experience and one that we are so grateful to be a part of.

Community Christmas is a benefit event for over 1,000 families in the Weber, Davis and Box Elder areas. They serve approximately 2,500 children who are not receiving Christmas assistance from other Sub-4 Santa programs. All volunteers are unpaid and have been providing assistance to the communities for 10 years now.

This is truly a grassroots movement which has no plans of ever stopping.

Walter has been given to the family of Hossen A. There are 9 family members in this household from Reef Hama, Syria. They have been living in a refugee camp in Jordan for 10years. 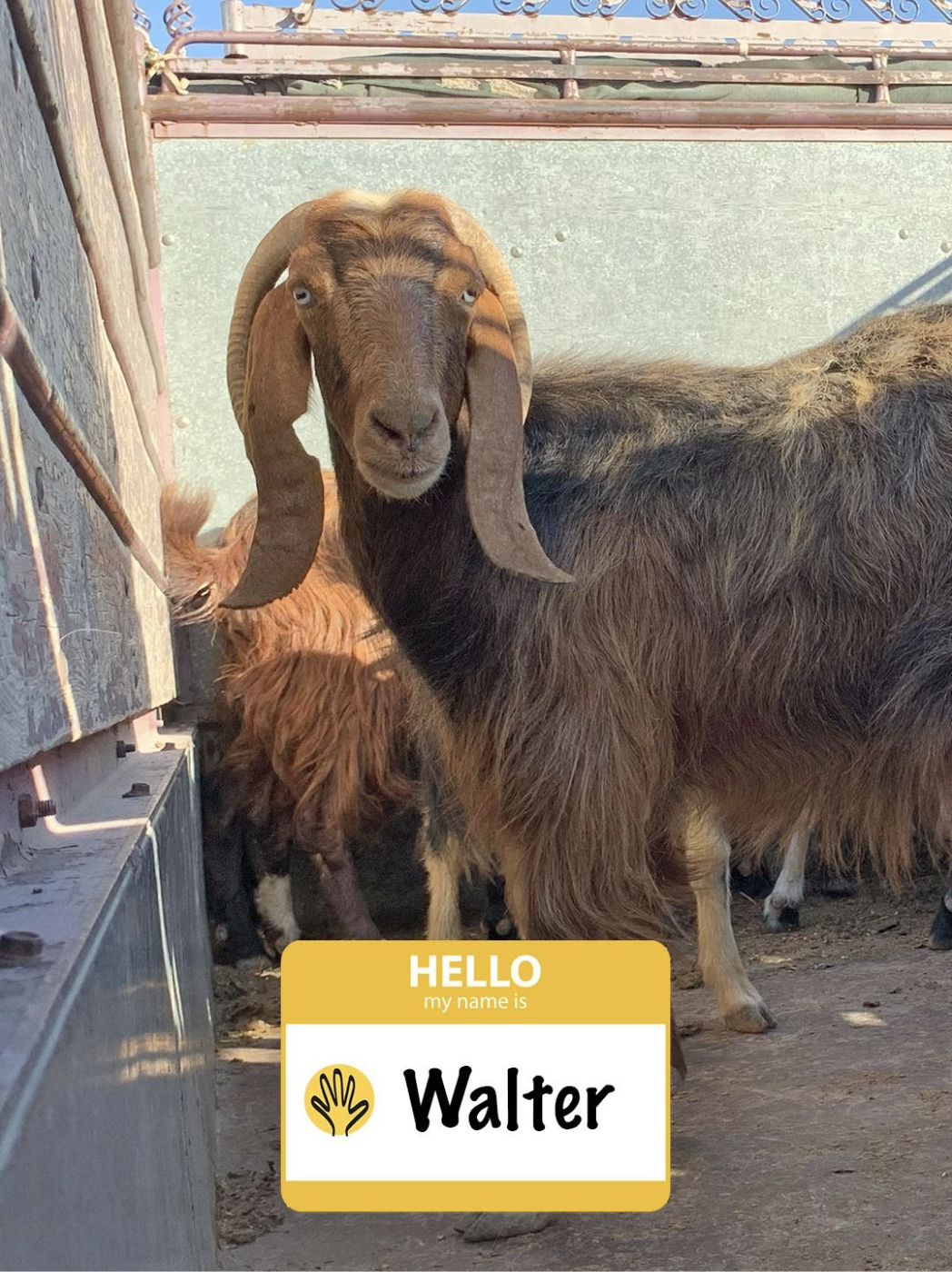 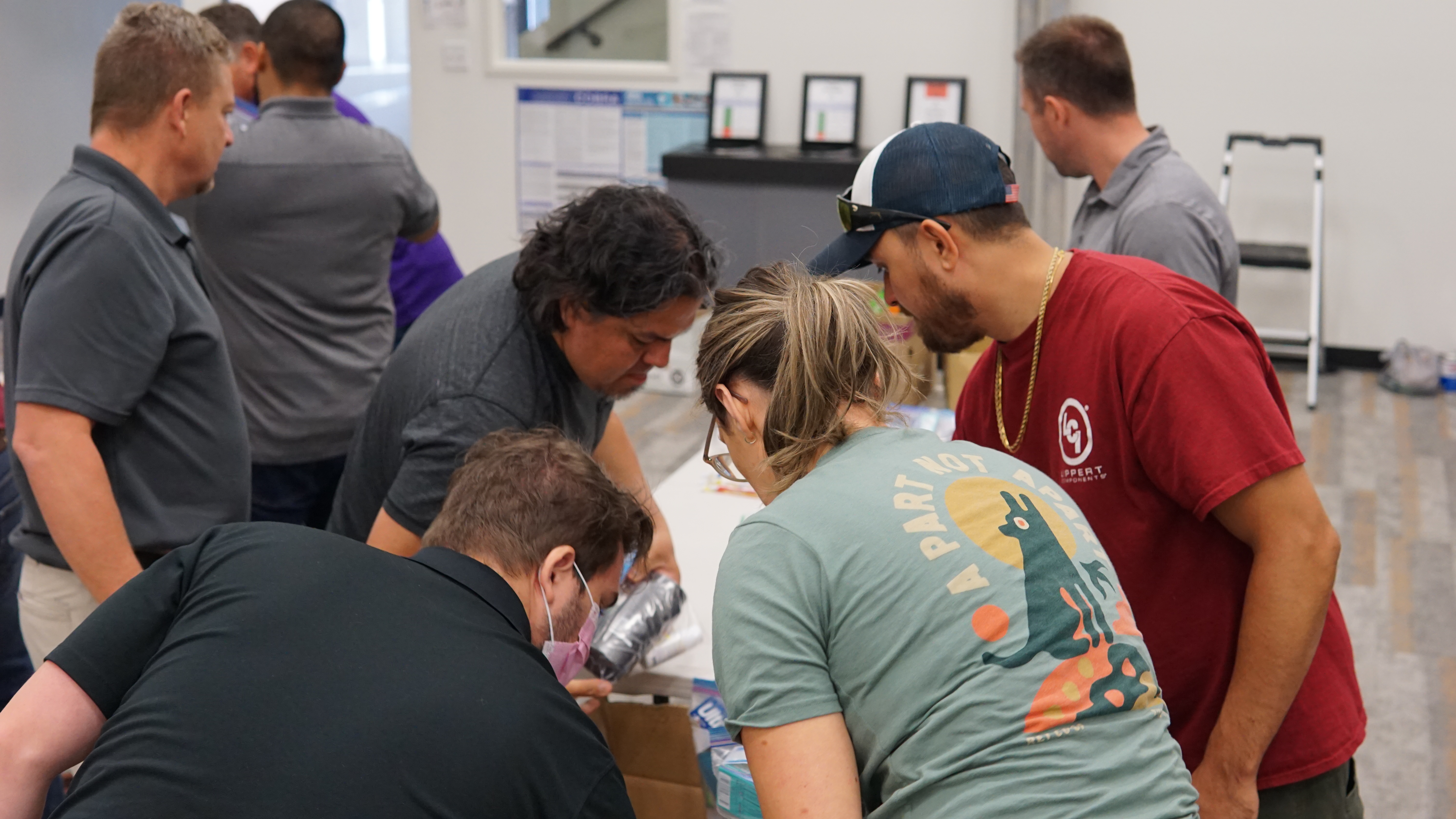 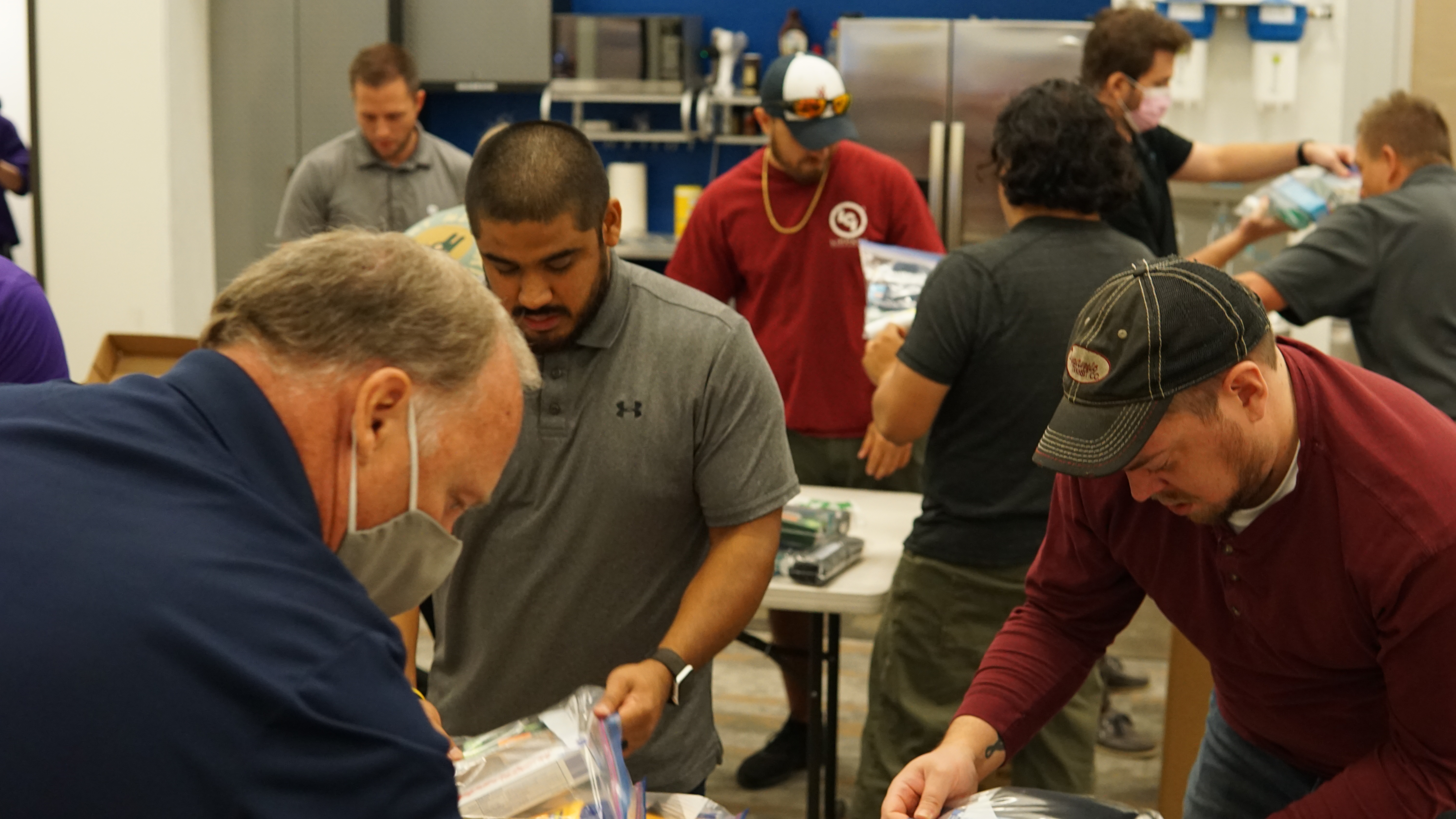 Ready. Set. Go! The Great Hygiene Kit Race was on! The goal: to make 100 hygiene kits for refugees (50 kits per team). The prize: Name the milk goat!

We divided our volunteers into two teams of six, Thing 1 and Thing 2. The evil queen separated the groups that had formed, forcing folks from different departments of the company to work together. Divide and conquer was the motto for the day, plus it was a great way for folks to get to know and work with others outside of their own little in-house community.

Both teams were off to a great start, supplies flying everywhere! It was neck and neck as Thing 2 finished only seconds before Thing 1, or thought they had… they realized, as did Thing 1, that they had a few random items leftover that had not been placed into the kits. “Nay Nay” said the evil queen, “no items shall be left behind!”. The crews gave each other a panicked look and hysterical madness set in as both teams struggled to re-check each and every kit they had put together in an effort to find the missing pieces and beat the other team! After some technical difficulties, we determined that it was pretty much a tie as both teams screamed “finished” at almost exactly the same time after all, well, most of the missing items had been located and the kits finally complete.


In the end we had everyone write down a goat name and throw it in the hat. Our winner was, drum roll please, Walter. Yes, Walter the goat will be sent to help one of the many Syrian refugee families in Jordan. From what I hear Walter isn’t really that great at mending clothes or doing laundry but can make a mean creamy cheesecake. Our hearts couldn’t be happier for both Walter the milk goat and his or her new family. For more information on Lifting Hands International please visit https://www.liftinghandsinternational.org/

Our fantastic team set out before the sun peaked its blazing head from behind our lovely mountains. Braving dewy mounds (aka: wet shoes and grass stains), our team lugged heavy coolers of ice, water, and boxes filled with all sorts of fun goodies to hand out, across the vast green of the Red Ledges golf course. All in an effort to provide a super fun and memorable event to the unselfish individuals who so kindly donated their precious cash and time to this heart-warming event!

This month we had the opportunity to sponsor the Cause Fore The Paws golf event which was put together by Paws for Life Utah. Paws for life is a non-profit, volunteer run organization dedicated to helping homeless dogs, cats, and other “at risk” animals from municipal shelters find “forever loving homes” through community partnerships, education, and adoption events. They also work with several veterinary care clinics to provide medical care, immunizations, spay & neutering, as well as microchipping each pet that enters their program. 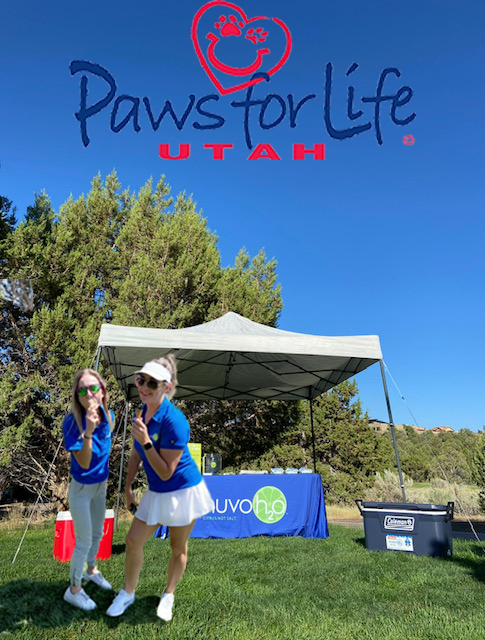 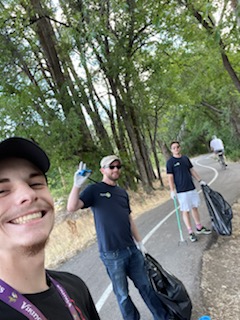 Through Ogden city we were able to organize a cleanup along a section of the Ogden River Parkway trail that runs from Washington Blvd west to the 21st pond. Ogden city kindly provided us with trash pickers, bags, and turned us loose!

Our team worked for several hours picking up trash and other various items along this beautiful and popular trail, helping to make it a cleaner and safer place for the community. When all was said and done, they had a total of 5 very large bags full of trash along with a couple of scary needles and one random tire!

Each week they head out to the streets in search of youth in need, to build rapport and encourage the youth to access drop-in and shelter services. Essential supplies (i.e. Hygiene kits, blankets), case management services, and access to community resources like medical care and employment are offered. 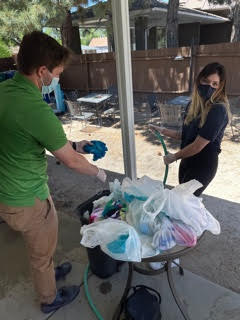 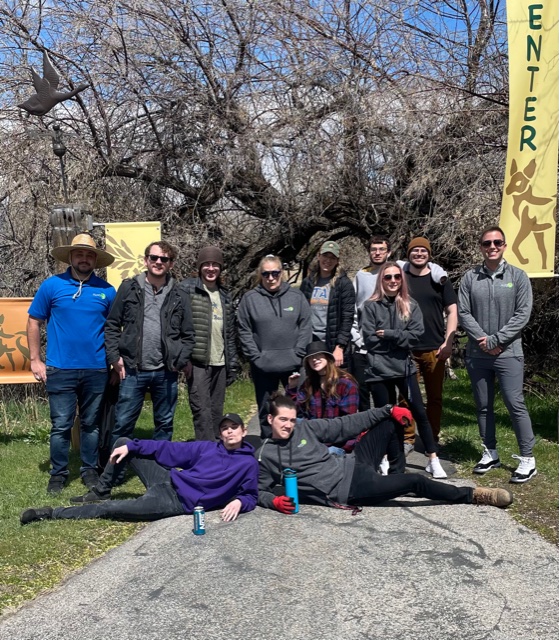 In honor of Earth Day, NuvoH2O had its first ever company wide project where we assisted the Ogden Nature Center with habitat restoration by removing weeds.

Pulling weeds sounds like unfair torture set upon you by your parents for not making your bed or staying out past curfew, but in this case our team made it a time to be envious of! We probably had more fun than we should have learning about the different kinds of “weeds” and plant life surrounding us, trying to hunt them down like a four-leaf clover in a vast never ending clover field shouting “jackpot” while jumping for joy and shoving it in everyone's face upon success.

Props to the Nature Center employees who not only put up with this bunch of silly clowns but who were more than forgiving when we accidentally pulled a “good weed” or two...oops, who knew?! In all, it was a fantastic experience to be out in the fresh air, one with nature, and with our amazing team of jokesters having laughs and being able to give back a little to our beautiful great state and community.